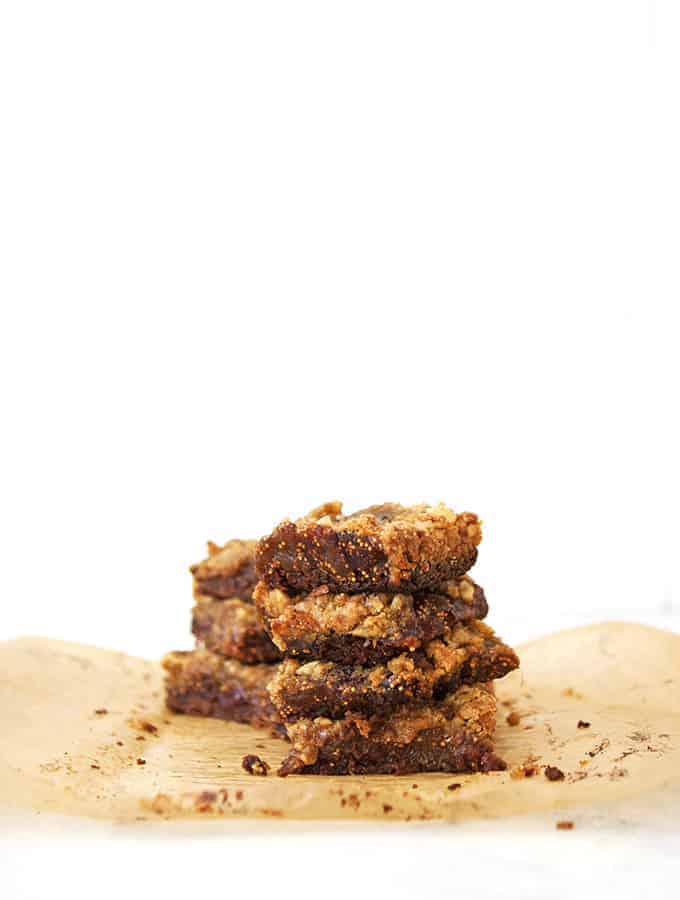 These fresh fig crumble bars are not your typical Newton. Buttery, jammy and soft they are a rich addition to a lunch box or afternoon snack with a cut of tea. Big Fig Crumble Bars, another little jewel from the Bijouxs kitchen.

Late summer’s bounty has brought a number crop of figs in the LA markets. I can’t resist them, knowing that Fall is now upon us. One last hurrah, baking my Big Fig Crumble Bars. Making your own fig jam from fresh fruit is very simple. The basic technique, here in Everyday Strawberry Jam or Wild Blueberry Preserves, of these ‘refrigerator’ jams are very simple, and can be achieved in a short cooking time with great results.

I am calling these Big Fig Crumble Bars, because I put double the fruit filling. Also, upon my recipe research I came upon a part of fig newton cookie history, yes, it involves a Big Fig!

Back to the late 19th century, doctors believed that most illness was related to digestion issues, they recommended a daily intake of biscuits and fruits? Enter fig filled cookies, which covered all the bases. In 1891, a baker and fig lover, Charles Roser, invented and patented a machine in 1891 which inserted fig paste into a thick pastry dough, he was serious about the fig bars! The recipe was purchased and first Fig Newtons were baked at the F. A. Kennedy Steam Bakery, named after the city of Newton, Massachusetts, and mass production began. The Kennedy Biscuit Company had recently become associated with the New York Biscuit Company, and the two merged to form Nabisco—after which, the fig rolls were trademarked as Fig Newtons. These cookies were big.

In the 1970s, Nabisco ran a popular advertising campaign for the Fig Newton. The TV commercials featured actor James (Jimmy) Harder as “Big Fig”, dressed in a fig suit, who sings a song in praise of Fig Newtons, really. At the conclusion of the song, he struck the “Fig Newton Pose”, leaning forward and balancing on his left foot, with arms spread and right leg raised behind him. (“Is it good? Darn tootin’! Doin’ the big Fig Newton.”) This link to a tv commercial  says it all, screaming the 70’s. Luckily, I have no recall of these commercials, I was probably more into Cheetos and Jack in the Box Tacos.

Wow, stats claim $14.8 million was spent advertising Newtons in 2011. The advertisements are generally based on nostalgia and directed to baby boomers rather than current kids. Since 2012, the “Fig” has been dropped from the product name, just known as one name product, ‘Newton’ (like Cher). Nabisco makes varieties of the Newton, which I am sure you have seen, in addition to the original fig filling. Versions are filled with apple cinnamon, strawberry, raspberry, and mixed berry.The Fig Newton also is sold in a 100% whole-grain variety and a fat-free variety for the health. 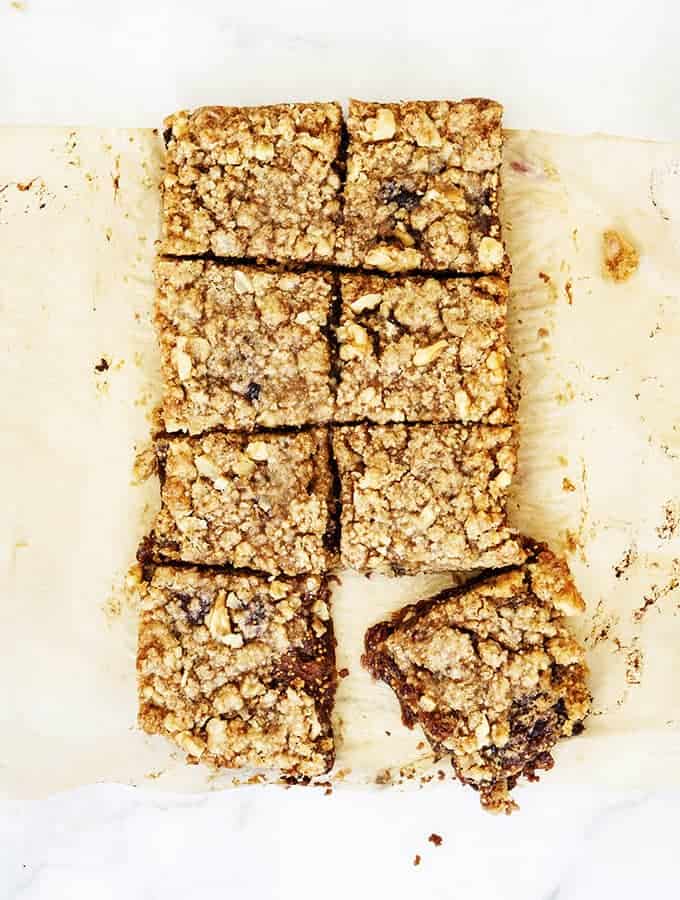 My feeling is if you’re going to make your own ‘Fig Newtons”, you might as well make
the jam too, it is so easy. I added a simple recipe for the fig jam but if you’d rather use a store-bought jam, choose one that’s very, very thick or cook it down; otherwise, it will seep out of these super soft bars. I have made the bars with figs, but they are just as delicious filled with my Everyday Strawberry Jam or Wild Blueberry Preserves.

I hope you enjoy my Big Fig Crumble Bars, and a little fig newton history. I enjoy these bars and they disappear fast around home.
Thanks for being a part of Bijouxs! 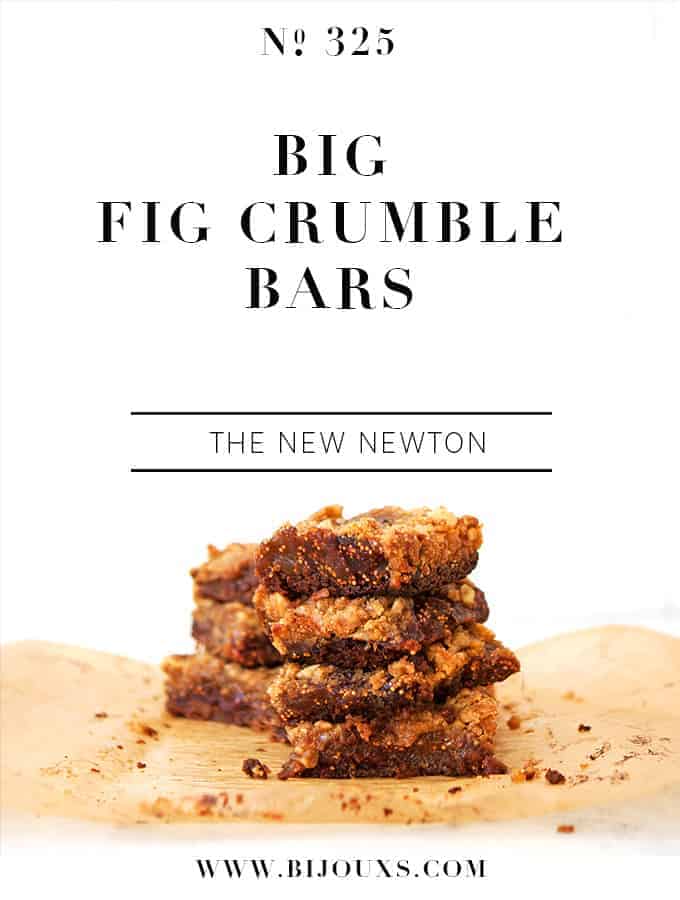 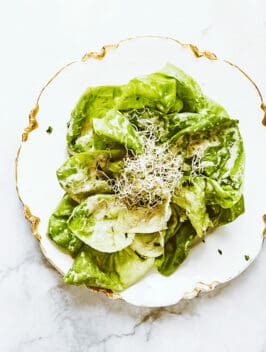 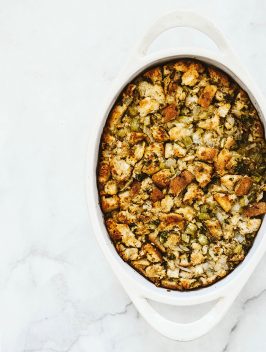 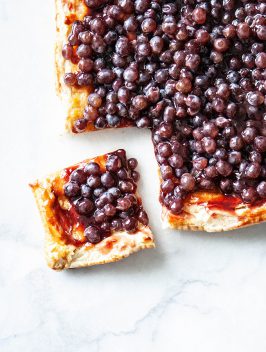