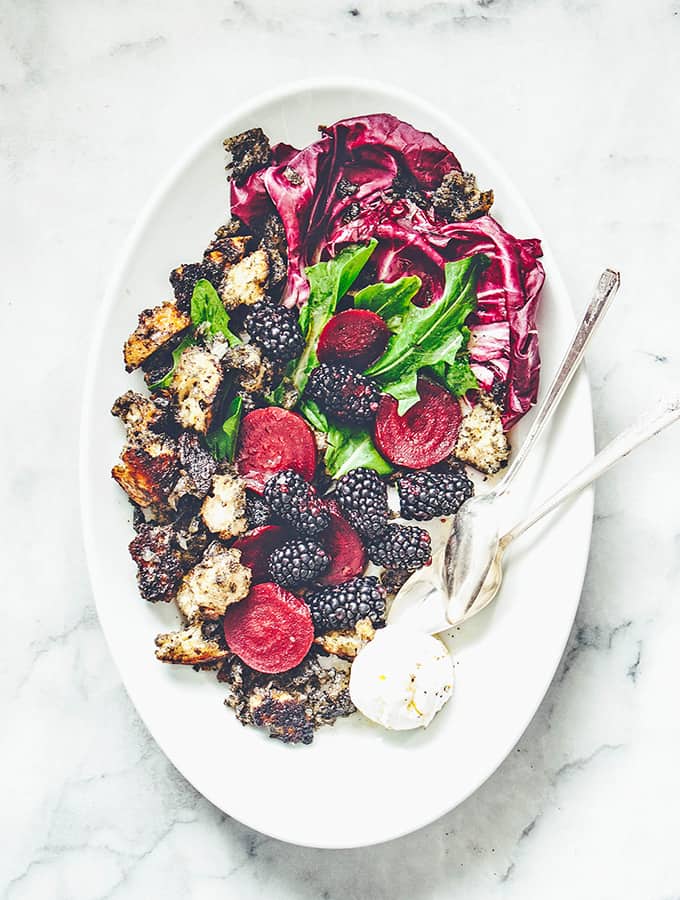 The brilliant Italians know how best to re-use stale bread, they make a wonderful salad called Panzanella. I must say necessity is the mother of invention, and this salad came out better than expected thanks to a little help from friends.

I have made a planned Winter Panzanella here on the blog, but this time is a little bit different. I not only have to rescue some stale bread, but make use of an assortment of fresh and refrigerated items which need to be used, before the long-life canned & frozen goods.  Wow, thinking about having enough food, this is new. During normal times in the summer I make traditional Panzanella with fresh tomatoes, stale bread, fresh basil and dress with oil and vinegar, no recipe needed. 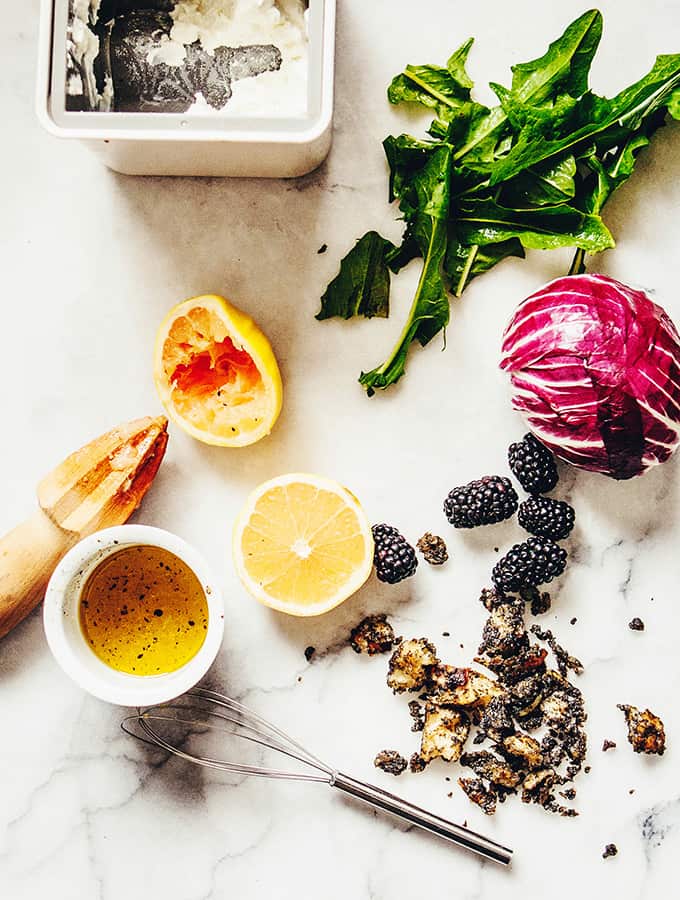 Panzanella is a highly adaptable salad, so this is the perfect time to test its limits. Seasonal panzanella came to me from Micheal Chiarello in his book Casual Cooking, which is a keeper from 2002. The idea is to use basic components that create the salad. 1) stale bread or croutons  2) cooked & raw vegetables 3) greens 4) soft creamy cheese and a light olive oil and vinegar dressing. The bread happily absorbs the dressing and juices from fruits/vegetables, rendering the stale bread soft and delicious. Practical genius from the Italians.

So on hand in the kitchen during the current ‘stay at home’ order, was my failed ciabatta I had baked, now to be used for croutons, a jar of black sesame paste open, left over from another recipe, packaged baby beets already cooked, various greens of radicchio and dandelion greens and a bit of labneh left over from my breakfast bowls. Had anyone else made a panzanella with these crazy ingredients? Yes, I found a recipe via Sunday Suppers that used some of the ingredients, so I was not losing it yet in solitary confinement.

Salad Days refers to a heyday, a period when we were at the peak of their abilities—not necessarily in that person’s youth, but just good times. We could use those good times right now.

Teeing off various recipes, I bravely used my ingredients and actually hit upon a delicious salad. I know the berries are pushing things, but they work, still being a bit tart because they are early in the season. I am a big fan of ‘everybody in’ when it comes to salads. I have my Market Basket Summer Salad, Salad of Apricots & Lentils, and Herb Salad with Jicama & Cherries (my fav) here on the blog. Yea, I am big on salads, as are most who hail from California. 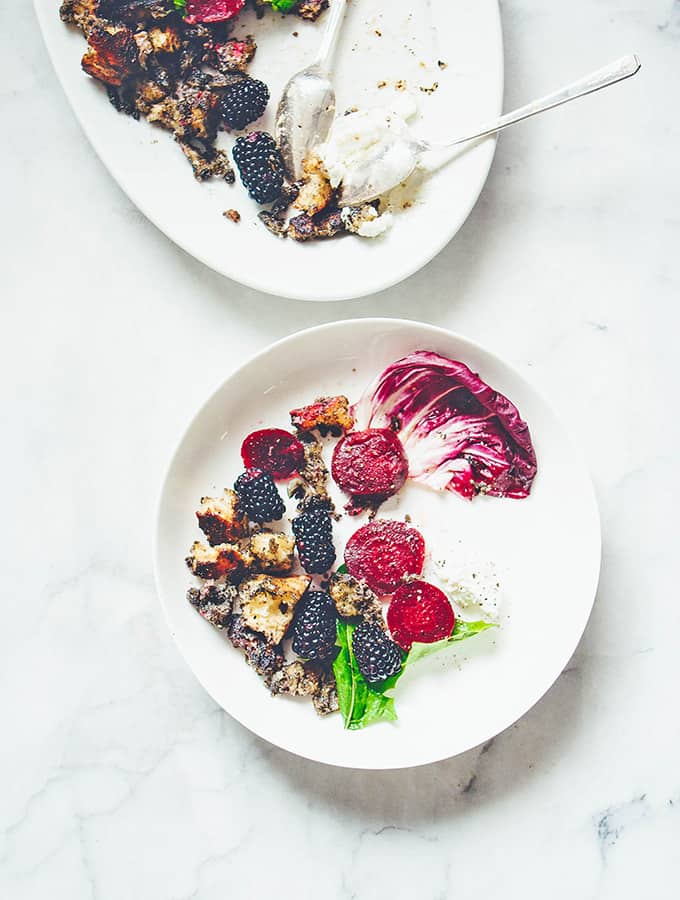 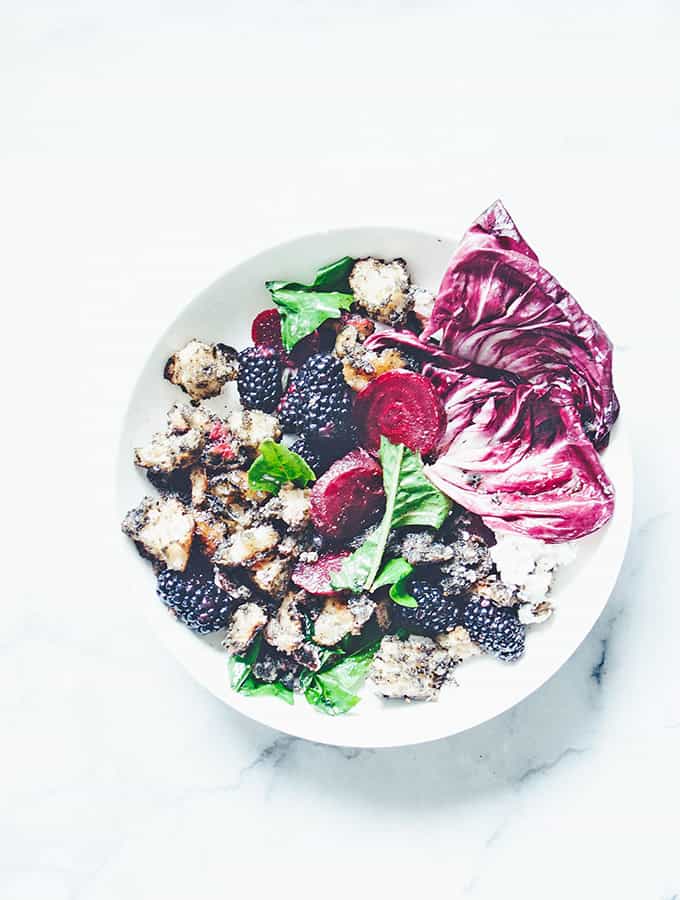 You probably have the ingredients now for your own Panzanella creation. Bread, vegetables, fruits & some greens and a bit of creamy cheese tops it off. It’s a great way to not waste food and include a variety of foods. Here’s to  the Salad Days of the future. 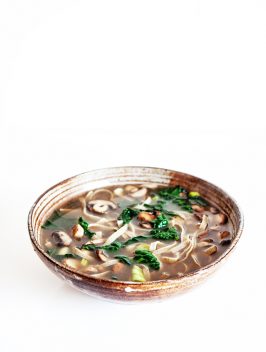 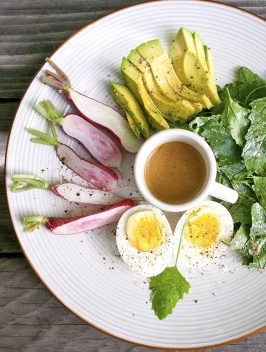 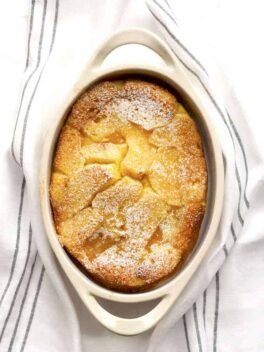